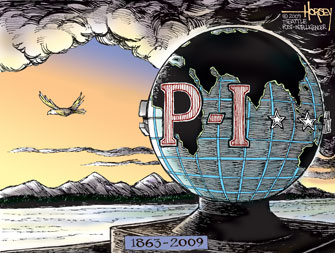 The new Internet-only P-I will be a news aggregation site “featuring content from various Hearst-owned magazines, and… links to stories on competing Web sites.” The site will rely heavily on free content provided by 150 “reader bloggers” and guest columns by prominent local citizens. They promise to continue to do some local reporting and commentary, but the staff of 165 has been reduced to 20 (plus freelancers), and “the operation won’t have specific reporters, editors or producers — all staff are expected to write, edit, take photos, shoot video and produce multimedia.”

It’s possible that Seattle could become a no-newspaper town, as our last daily paper, the more conservative Seattle Times, is also in serious financial trouble.

Here are links to the P-I website, the New York Times article about the P-I’s transition to web-only, and an interesting series of posts from The Stranger’s Slog. (For those who aren’t from Seattle, The Stranger is the more snarky and entertaining of our free weeklies.)

This entry was posted in Crimes against literature, In the news, Newspapers, Seattle. Bookmark the permalink.