Posted on April 24, 2013 | Comments Off on Edward de Grazia, the lawyer who fought book censorship & wrote Girls Lean Back Everywhere

In a 2008 post about Banned Books Week, I recommended an excellent 1992 book about literary censorship and obscenity prosecutions in the United States, Edward de Grazia’s Girls Lean Back Everywhere: The Law of Obscenity and the Assault on Genius. He was a lawyer who fought the censorship of books in a number of prominent cases in the 1960s. 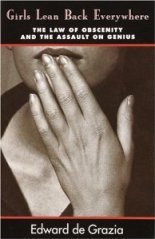 This morning I learned that Edward de Grazia has died at the age of 86. Here’s his obituary from the New York Times.

Here’s an excerpt from my original post about his book:

The title is taken from a quote by Jane Heap, who (with Margaret Anderson) was prosecuted in 1920 for publishing episodes from James Joyce’s Ulysses in their magazine, The Little Review:

Mr. Joyce was not teaching early Egyptian perversions nor inventing new ones. Girls lean back everywhere, showing lace and silk stockings; wear low-cut sleeveless blouses, breathless bathing suits; men think thoughts and have emotions about these things everywhere–seldom as delicately and imaginatively as Mr. Bloom–and no one is corrupted.

This work describes in detail the publishing histories and obscenity trials of the most controversial books of the 20th century, including Joyce’s Ulysses, Vladimir Nabokov’s Lolita, Radclyffe Hall’s The Well of Loneliness, Henry Miller’s Tropic of Cancer, D.H. Lawrence’s Lady Chatterley’s Lover, William Burroughs’ Naked Lunch, Allen Ginsberg’s Howl, and Theodore Dreiser’s An American Tragedy, as well as later trials involving the monologues of Lenny Bruce, the photographs of Robert Mapplethorpe, and the lyrics of 2 Live Crew.

What makes this work particularly entertaining are the extensive quotes from the authors and publishers involved. As de Grazia notes in his introduction:

I wanted to find out, and describe, how the persons who were most immediately affected by literary censorship–authors and publishers–responded to and felt about it, and to present their reactions as much as possible in words of their own. I also wanted to say what I could about the nature of the legal and constitutional process that has framed the struggle against censorship in our country….

This entry was posted in Authors, Books, Censorship, Controversy, In the news. Bookmark the permalink.