My new Books the Founders Read post on Blackstone

Posted on April 22, 2015 | Comments Off on My new Books the Founders Read post on Blackstone

My new Books the Founders Read post on the Bauman Rare Books blog is about William Blackstone’s Commentaries on the Laws of England, the most important and widely-read law book in 18th-century America. 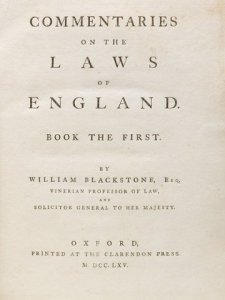 You can read my Blackstone post here. If you’re interested in reading my other blog posts for Bauman Rare Books, there are links in the sidebar to the right.

“In no country perhaps in the world is the law so general a study… I have been told by an eminent bookseller that in no branch of his business, after tracts of popular devotion, were so many books as those on the law exported to the plantations. The colonists have now fallen into the way of printing them for their own use. I hear that they have sold nearly as many of Blackstone’s Commentaries in America as in England… This study renders men acute, inquisitive, dexterous, prompt in attack, ready in defense, full of resources. In other countries, the people, more simple, and of a less mercurial cast, judge of an ill principle in government only by an actual grievance; here they anticipate the evil, and judge of the pressure of the grievance by the badness of the principle. They augur misgovernment at a distance; and snuff the approach of tyranny in every tainted breeze.”
–Edmund Burke’s 1775 speech on conciliation with the American colonies